Vote: What Are the Best Pokemon That Aren’t In Sword & Shield? | IGN

Last week, we launched a FaceOff pitting every Pokemon not in Sword and Shield which haven’t been confirmed for the expansion pass coming later this year, against each other. We asked you, “Which Pokemon do you want most in Sword and Shield?” After many, many one-on-one, randomized matches between 392 Pokemon, we have your most (and least) wanted Pokemon for Sword and Shield ranked below.

In short, everyone loves Dragon-type Pokemon, Starters from all generations, and a few strong, iconic Pokemon primarily from Gen 1.

Are the results surprising to you? Let us know in the comments below.

The 10 Most Wanted Pokemon

While the FaceOff pitted individual Pokemon against Pokemon, we decided to group the Top 10 by evolutionary lines to give you a broader look at the favorites, because many of the same evolutionary lines made it so high up the ladder. For an unadulterated Top 25 Most Wanted Pokemon list, click through the slide show.

10. Blaziken (and Torchic and Combusken)
From adorable bird to firey badass, it’s no surprise to see this starter evolutionary line from Gen 3 kicks off this top 10 list.

9. Salamence (and Bagon and Shelgon)
There’s nothing more inspiring than seeing this rock-headed creature finally grow wings. Salamence is an incredibly powerful Dragon-type Pokemon that saw a lot of favoritism in competitive Pokemon during its prime.

8. Sceptile (and Treecko and Grovyle)
Treecko will glare at any foe that dares to glare at it, according to its Alpha Sapphire/Omega Ruby Pokedex entry. So it makes sense that it didn’t back down during these FaceOffs.

7. Swampert (and Mudkip and Marshtomp)
This line of spikey-cheeked mudfish was voted the favorite starter evolutionary line of Gen 3. It seems people still like Mudkips.

6. Feraligatr (and Totodile and Croconaw)
Feraligatr is the final evolution of a beloved Gen 2 starter. It doesn’t deviate much when it comes to design, but what you get makes sense, looks great, and maintains that signature huge jaw.

5. Aerodactyl
One of two Gen 1 Fossil Pokemon in the top 25, Aerodactyl boasts an 85% win rate.

4. Scyther (and Scizor)
Undeniably the most popular Bug-type Pokemon, Scyther and its evolution, Scizor, were both ranked in the top ten.

3. Typhlosion (and Cyndaquil and Quilava)
This evolutionary line basically just gets bigger and more fiery, what’s not to love? It’s also the most liked second generation starter, while Meganium got completely, dare I say, burned – only reaching number 37 in the ranking.

2. Alakazam (and Abra and Kadabra)
Some would say these Pokemon just get more spoons and they’d be correct.

1. Dragonite (and Dragonair and Dratini)
Dragons are the best. Is there really anything more to say here?

You love to hate them. Below are the 10 least wanted Pokemon not currently in Sword and Shield. For the full Least 25 Most Wanted Pokemon list, click through the slide show.

10. Gulpin
While there may be something charming about the simplicity of its design (green little blob), the fact that it’s entire body is basically its stomach just doesn’t sit right.

9. Volbeat (and Illumise)
Introduced in Gen 3, Volbeat and Illumise are weird humanoid looking Bug-type Pokemon that can light up, and performed equally poorly.

7. Patrat (and Watchog)
These Gen 5 equivalents to Rattata are just as useless, but also less popular. Just imagine how disturbing it would be to have one as a partner because it would always be watching.

6. Comfey
It’s a Lei. It’s more creepy than comfey and it’s categorized as a posy picker because, according to its Ultra Moon Dex entry, it picks flowers and sticks them to its body with fluids it produces. Gross and not very welcoming.

5. Foongus
It’s head has a Poke Ball pattern which makes it look like it broke out in a fandom based infection or, worse, like a Poke Ball became its own form. 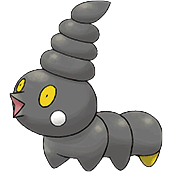 Take one look at a naked Burmy and you’ll see why this Bug-type Pokemon is so unpopular. Mothim, Burmy’s male evolution, didn’t fare too well either, but its 49% win rate is downright impressive when compared to its pre-evolution and female counterpart, Wormadam.

3. Alomomola
Though inspired by the ridiculous yet beloved Mola Mola fish, Alomomola is just not ridiculous enough to raise its popularity.

2. Bruxish
Though its Dazzling ability made it seem useful, it turns out not all that glitters is viable. This is a just another dumb fish, but this one has creepy teeth.

1. Luvdisc
No love for Luvdisc. It’s a fish, it’s a heart, it just wants to be loved. But apparently that was too much to ask.

For more information on how we (or you, rather) chose the winners and losers above, check out an explanation on FaceOffs.

What Is a FaceOff?

As the name suggests, in a FaceOff we’ll have one pokemon face off against another and it will be up to you to choose the winner. In this case, you’re looking at two Pokemon and picking which one you’d prefer to be in the Pokemon Sword and Shield Expansion.

It’s possible to see the same Pokemon multiple times, especially if you keep clicking through the FaceOff. There are over 390 Pokemon here that get randomly paired up each time you pick a winner.

How do I know when I’ve clicked through everything?

There isn’t a surefire way to know that you’ve seen all the Pokemon included because they are matched up randomly. And, because there are so many combinations. Maybe you want to play until you get to choose Cyndaquil or maybe you just want Sandygast and Palossand to lose every time you see them. Keep clicking through pairs until you feel like you’ve adequately fought for your favorite Mons. We’ll let math take care of the rest.

Which Pokemon have you included?

The Pokemon you see in this FaceOff are based on a process of elimination.

We’ve included all the Pokemon that are not included in the Pokemon Sword or Pokemon Shield base games or already confirmed/hinted at for the Pokemon Sword and Shield Expansion Pass. Please note that in instances where we’ve already seen a Pokemon that has an evolutionary line we’ve excluded the other Pokemon in said line. This means that Bulbasaur and Ivysaur are not in this FaceOff because we’ve already seen images of Gigantamax Venasaur.

How is this tracked?

Every time you select a winner from a pair we get that information as a “point” in favor of that Pokemon. When we’re done tracking this information the Pokemon with the most points will be ranked from most to least, leaving us with a tidy list of Most Wanted Pokemon.

This means you can keep clicking through for as long as you want, giving your favorite Pokemon a better chance of winning. And you can return to this FaceOff as many times as you want, while it remains live.

For more on Pokemon Sword and Shield, be sure to check out our wiki guide. There, you can find everything you need to know about both Expansions including a working list of the Pokemon being added to Sword and Shield, all the legendaries, how to get Galarian Slowpoke, and much more.
Read More